Come out and play.

The Warriors, it should be said, remains one of the strangest films ever made, a kind of childlike febrile fantasy of the death of law. I am tempted to call Walter Hill a great surrealist, the way that the end of The Warriors mysteriously seems to parallel the end of La dolce vita, the extravagant homo-orientalsim of the opening sequence of Red Heat, the film from which an impressionable David Cronenberg surely stole the bath house fight in the underrated Eastern Promise. The Warriors urban fantasy land is touched with real Utopian promise, a post-patriarchal city in which the gangs divide up the territory between themselves and a form of anarchic, liberated play can reign. The gangs  themselves  in their  flamboyant dress and exaggerated mannerism along with their pop cultural references  back to the  films  two most  obvious  predecessors A Clockwork Orange and West Side Story are as delightfully camp as anything in Rocky Horror. Sheer Fabulousness. 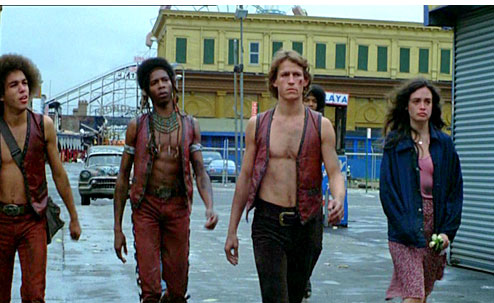 Like much of the contemporary ruin-porn around Detroit, the legacy of de-industrialization also serves to cast declining cities as objects of fascination, post-apocalyptic arenas in which the ancient and ultra-modern intermingle and a whole genre of gang-related and cyberpunk (B) movies are also due to proliferate.