a note on premediation

Once you've got the idea of premeditation you begin to watch everything through that lens, especially if you have been watching lots of films that deal with America's relationship with Japan in the Eighties and its largely negative depiction of the Japanese.
Interesting to note then, watching films on the plane on the way back from England, that one of the big flops of 2012 Battleship is a film in which the Americans and the Japanese are friendly if rivalrous team mates battling an alien technologically advanced power in an around the South Pacific, long predicted and increasingly proving to be an arena of major conflict over the next century.
Two days after I arrive back the Senkaku/Diaoyu islands' dispute hits ugly new heights. 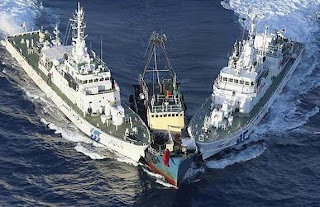